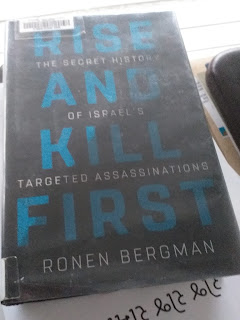 A good read, The book “Rise and Kill First” is the first book of its kind on secret operations of Mossad and other Israeli Defence/Espionage/Targeted Killing etc.  Starting from early years of formation of Israel till the famous Dubai operation of 2010 (Al Bustan Rotana Hotel), the writer Ronen Bergman has covered several episodes.

It shows, foresight, resolve, clear idea about who the enemy is, effort, will, patience, dedication, desperation, fear, danger, Government, opposition, management and total secrecy required in  accomplishment of assignments.

Interesting info, CIA was not always cooperating with Mossad prior to 9/11terrorist attack on USA. But from that day onwards, it opened up totally to Mossad.

It also shows how much care a democratic countries take in ensuring that innocent civilians, women and children do not end up as collateral losses.

With suicide bombers multiplying their attacks on Israel, They needed to put a stop on Suicide bombers. They were desperately looking to kill potential suicide bomber and idealogues of Suicide-Jehadis. Israeli constitution, International human rights rules or rules of any democratic country does not allow extra judicial killing. They needed a strong legal opinion on this issue. The lawyers gave a logic, that worked admirably for them.The Suicide bombing stopped in its track because Israel killed the entire supply chain of bombers. The logic was simple. In 2001, 18th January, a top secret legal opinion was submitted to Israeli PM. “If someone comes to kill you, rise up early and kill him first” (The Babylonian Talmud. Tractate Sanhedrin. Portion 72, Verse 1)

While reading above, I remembered that in Sanskrit texts,
“the people who (1) administering poison; (2) setting fire to another’s home; (3) stealing; (4) occupying another’s land; (5) kidnapping another’s wife; and (6) attacking with a deadly weapon are known as Atatayi. Such aggressors, or criminals (atatayi), say Vedic texts, should be killed by the protectors of the righteous.”

“Manu-Samhita 8.350–1 says: “Whether he be a teacher . . . an old man, a much learned Brahmin or child or lady, if comes as a criminal (atatayi) in any of the above six ways, a Kshatriya should kill him. . . . There is no sin in killing one so heartless.” “In fact, Hindu
tradition asserts that “such a criminal is in reality killing himself by his
own outrageous behavior.” “(Quotes curtsey “Essential Hinduism” by Steven J. Rosen)

A trivia: The daredevil Assassins of Mossad were members of a group named as Caesarea. Curiously, Hindu dare-devil acts of fighters are known as “Doing Kesariya”. (Kesariya Pronounced same as Hebrew Caesarea)

Posted by Nilesh M Shukla at 5:52 PM No comments: