"VARNA-MALA" Sequencing of Alphabets in Sanskrit and rest of the South Asian Languages. A logical sequence

European Alphabets, traditionally follow sequence from A to Z. Similarly, in Indian languages, it is from क to ज्ञ. However the main difference being presence of logical sequencing of order. Indian अक्षर sequenced in a logical, speech-pattern order. This manner of arrangement of Indian ‘Akshar’ (अक्षर) is known as ‘Varna-Mala’ (वर्णमाला).


Sanskrit ‘varna-maala’ is shown below. The first line represents vowels and rest of the lines, consonants. 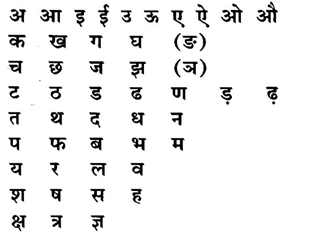 Indian alphabets are not sequenced arbitrarily but are grouped together based on the science of speech. Consonants are grouped in according to the usage and position of the tongue during their pronunciation. Those ‘Akshars’ that need touching the tongue to teeth are all grouped together and so also those where tongue touches palate and so on, again these are divided on the basis of how much air is required for speaking. In sequence, these categories are: velar, palatal, retroflex, dental, labial, sonorant and fricative. Among the first five groups, the ordering starts with the unaspirated voiceless, then goes on through aspirated voiceless, unaspirated voiced, and aspirated voiced, ending with the Nasal.


Another unique aspect of mother-language, Sanskrit is that, its every ‘akshar’ and every joined or ‘combo’ ‘akshar’ has a meaning and can be assembled together to make new words. As an example ‘akshar’ ‘ज’ means ‘Birth’ and ‘द’ means ‘Donate’. (You will see parallel between जन्म (janma) and ‘genesis’, जनन्  (Janan) and ‘genatics’, दानम् (danam) to ‘donation’)


Above table translated into Gujarati:

Sanskrit and other Indian languages have another unique characteristic. They have several synonym words for the same entity but rarely interchangeable by other as each word conveys specific context or attribute.


Sanskrit is an ancient language. World’s first known literary records (Rig-Veda) were written in that language. Over period of several millennia, a lot of rich literature is produced in Sanskrit language. Literature includes epics such as Mahabharata and Ramayana, Vedas and Upanishads, Raghuvansh, Harivansh, Shakuntal, Meghdoot, and thousands of other volumes were created by legendary authors such as Vyas, Valmiki, Kalidas, Harsh Vardhan, etc.


Do not be surprised when you look up Merriam Webster Dictionary, at http://www.merriam-webster.com/dictionary/sanskrit?show=0&t=1394686779  and it shows, etymology of the word ‘Sanskrit’ as “saṁskṛta, literally, perfected, from sam together + karoti he makes”. (you will see parallel between ‘sam’ and English words ‘sum’ and  ‘krita’ with ‘create’). Sams and Krita words together means ‘Created Perfectly’.  And, truly so, this language leaves us wondering at its extent of perfection.
What does 'Asanskrit' mean? It is an adjective and literally, it means 'devoid of Sanskrit' but is applied in Sanskrit and Indian languages, to actually mean, 'uncivilized', 'uncultured', 'raw or underdeveloped human'
Posted by Nilesh M Shukla at 11:27 AM No comments: